STRIVE Academy hosted their graduation on Monday, August 3 at 6 p.m. on the football field.

In partnership with Alumni Little Brother Bill, Big Brothers Big Sisters Michigan Capital Region is excited to invite our Bigs and Littles to “Fishing with Lee” on June 12 and 13.

Bill and his Big Brother Lee were matched in 1965 and remained great friends until Lee’s passing in 2020. Lee was a lifelong fisherman who often took “Billy” fishing in the summer, and ice fishing in the winter. It didn’t take much arm twisting to get Lee out on a lake where he seemed most happy. In memory of his former Big Brother and forever friend, Bill – with the support of Lee’s wife, family, and friends – wanted to provide current Bigs and Littles with the opportunity to fish together and make their own special memories.

Bigs and Littles can participate for free at any Michigan State Park. June 12 and 13 is Free Fishing Weekend in Michigan, so no recreation passport or fishing licensing fees are required.

Can’t make it June 12 or 13? No worries! Get out when you can and be sure to send them your photos.

Want to fish, but don’t have the gear? Bill has generously provided rods, reels, and starter tackle boxes that can be picked up at the Big Brothers Big Sisters office – first come, first serve! And don’t forget to hashtag #fishingwithLee and #bbbsmcr if you take any photos. 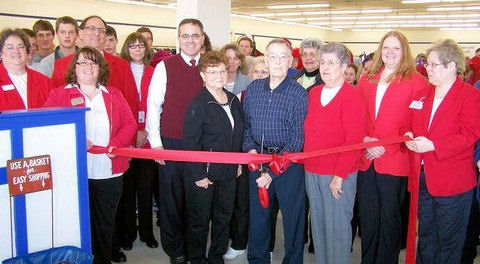 Members report that there was a good turnout for the ribbon cutting ceremony at the St. Vincent de Paul Store in St. Johns on Thursday January 19. The store is located next to Sav-A-Lot in the Southpoint Mall.

Also on hand were Bill Asher and his wife Yvonne. Bill is our longest serving Vincentian. Bill began serving as a St. Vincent de Paul volunteer in 1954 which makes him a volunteer for over 57 years. City Manager-Dennis LaForest shared his congratulations. They were also pleased to have the Clinton County Chamber of Commerce Ambassadors and the ladies with the Red Hat Society who helped them celebrate.

Since they are a Catholic lay organization, it was fitting to have their building and work blessed by the Church. Deacon Marvin Robertson offered a blessing over the retail space and a blessing upon the work of the St. Vincent de Paul volunteers.

Many people were recognized for their work in preparing the space for the new store. Ross Pope, Tom and Mary Hutton, Vern Smith, Tom Wenzlick, Dennis Koenigsknecht, Doug and LaVonne Schafer, Gary Brown and several St. Vincent volunteers put in a great amount of time.

Members point out that the group couldn’t have accomplished it all without the work that was provided by the Clinton County RESA Building Trades classes. They are a great group of young men.

Humans are not the only ones that deal with anxiety issues; cats can suffer from anxiety, too. As a pet owner, keeping your cat’s anxiety under control is important for establishing and maintaining a positive pet and human relationship.

There are many reasons a cat may experience anxiety, but there are also many calming products that pet owners can try to help manage their cat’s anxiety.

According to The Cat Coach, Marilyn Krieger, a certified cat behavior consultant based in Northern California, cat anxiety can stem from many causes. “A change in routine can be very jarring for a cat,” says Krieger. “New situations, an unfamiliar environment or a previously unknown animal can all cause stress. Even a home remodel or a raised voice can cause anxiety, depending on the cat.”

Mikel Delgado, a certified cat behavior consultant and cofounder of Feline Minds, a San Francisco Bay area company that offers cat behavior services, adds that anxiety is different from fear in that it’s a sustained condition. “There’s a difference between cats that get scared during fireworks on the 4th of July and cats that spend a lot of their time stressed out or afraid of what may seem like nothing,” she says.

If your cat does have anxiety, this can take many forms, from hiding and refusing to eat to urinating and defecating outside of their litter box. “On the other hand, cats that are comfortable in their environment will eat, drink and sleep in the open, they’ll interact with their people, they’ll play with toys, and they’ll generally be out and about—not just hiding and slinking around all the time,” Delgado explains.

If you determine that your cat is suffering from anxiety, there are several options available. However, finding the right one for your cat might take some trial and error. Both Delgado and Krieger stress that every cat is different, and a solution that works for one kitty might not work for another.

Delgado adds that because many cat calming products are available without prescription from a veterinarian, owners can’t expect them to work miracles. “Most products that are available over the counter don’t offer extreme results, but some may have a calming effect,” she says.

The Thundershirt for cats is a kitty-sized compression vest that applies a gentle, constant pressure, much like swaddling a baby.

Reportedly, this pressure can calm anxious and stressed-out animals. Delgado says that while there hasn’t been a lot of official research into the effect that Thundershirts have on anxious cats, they have been proven to have a calming effect on dogs.

“Anecdotally, I can say that Thundershirts seem to make cats less fidgety. I’ve heard many times that they’ll lay down and stop moving around if wearing a Thundershirt,” she says.

Delgado notes that while Thundershirts for cats may indeed have a calming effect, getting them on your cat can be an issue. “It’s important to be aware of exactly how much your cat can be handled and how amenable she may be to wearing any type of garment. Also, you should definitely consider whether or not she might injure you in the process.”

Delgado says that cat calming collars work for some cats, but have absolutely no effect on others. She adds that like Thundershirts, there is a chance that owners may have difficulty putting a collar on their cat. “If you’re looking to try out a collar, I recommend introducing the cat to it before trying to put the collar on your cat. Let him sniff it, and then offer him a treat. Don’t go and just put it around your cat’s neck, because that can cause stress and negate any positive affect the collar may have,” she says.

If you like the idea of treating your cat’s anxiety with pheromones, but you know that wearing anything would stress your cat out, try pheromone diffusers for cats. Cat calming diffusers like the Feliway plug-in diffuser can help with general anxiety in cats by emitting a synthetic version of the feline facial pheromones.

Cat calming diffusers like the Feliway MultiCat diffuser plug-ins are specifically made to help calm multi-cat households and promote harmony amongst cats. These diffusers use a synthetic version of the pheromone given off by mother cats while nursing kittens.

Krieger says that she strongly prefers diffusers to collars. “If a cat doesn’t like a collar, she can’t get away from it. If she doesn’t like the pheromones from a diffuser, she can walk into another room. So, if they’re helpful, you get the benefits without causing any undue stress, and if they’re not, you don’t cause any harm.” she explains.

Anti-anxiety cat food often contains components such as tryptophan—a compound found in turkey that is associated with sleepiness. These diets are also meant to soothe upset tummies, which could be a source of cat anxiety.

Treats work a little differently. According to Delgado, anti-anxiety cat products typically include alpha-casozepine, an ingredient said to help manage stress in both cats and dogs. “There’s some evidence that they do increase relaxation in cats and dogs under specific circumstances,” she says. “And it’s been tested in vet visits for cats. The tests showed that there was at least a mild calming effect.”

Beyond cat calming products, playing with your cats or training them to perform tasks can do wonders for their anxiety. “Positive interaction makes cats feel secure,” says Krieger. “Some cats love treats, others love play, and in some cases, clicker training can work really well.” While it is usually associated with dogs, using clicker training for your cat can be a great way to build a stronger bond and reduce cat anxiety.

Delgado adds that cat playtime can be integral in reducing anxiety. “Different cats respond to different toys—some like puzzles, others like feather dancers—you have to try out a few to figure out what your cat will like,” she says.

When Should You Call Your Vet?

For some anxiety-ridden cats, over-the-counter options just won’t do the trick. Delgado says that if you see your cat over-grooming, chewing on her nails, or otherwise injuring herself, it’s time to go to the vet. Delgado explains that veterinarians can prescribe cat anxiety medication to help reduce your cat’s anxiety and minimize these behaviors.